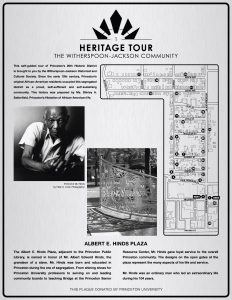 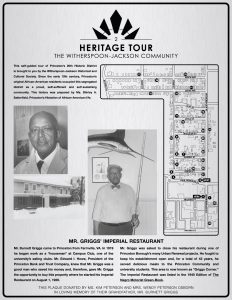 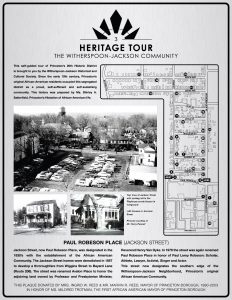 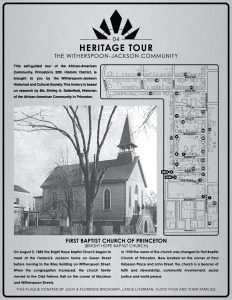 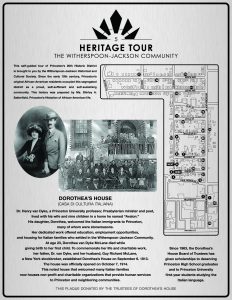 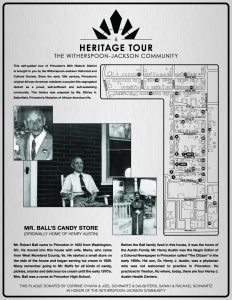 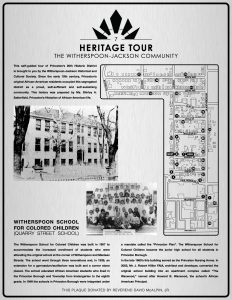 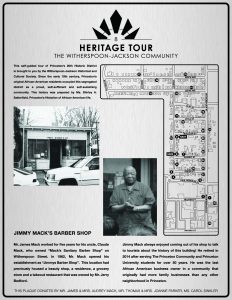 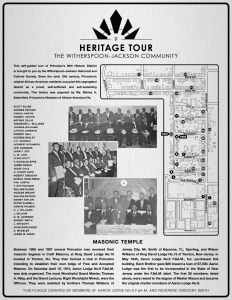 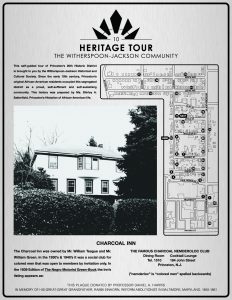 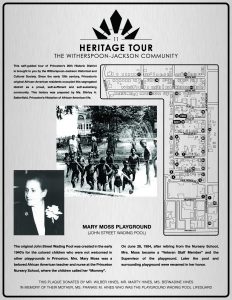 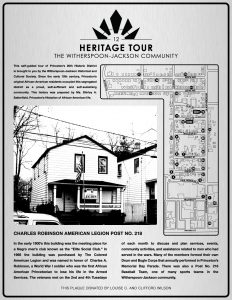 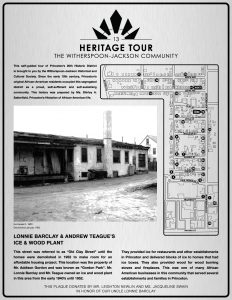 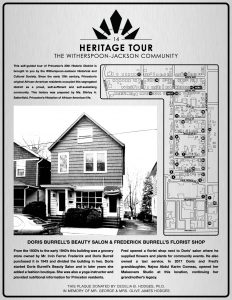 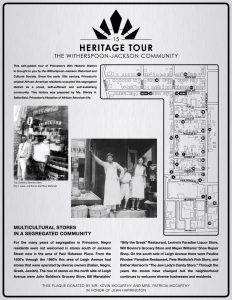 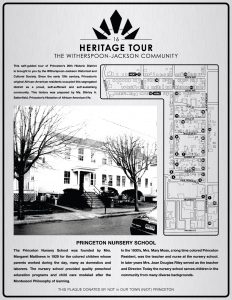 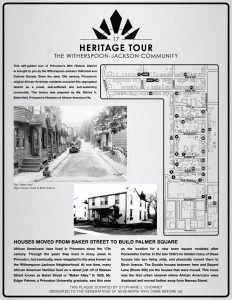 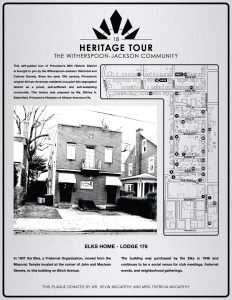 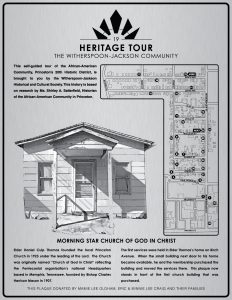 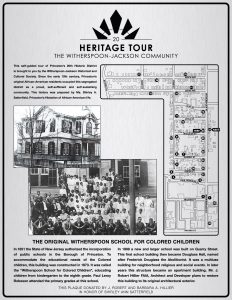 21 Entrance to the Colored Cemetery 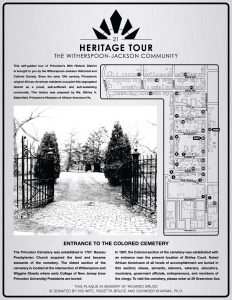 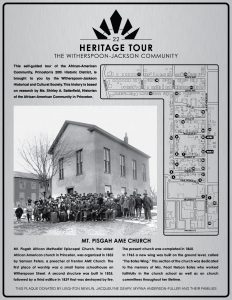 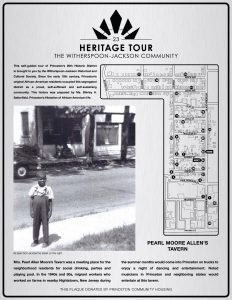 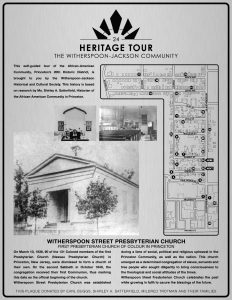 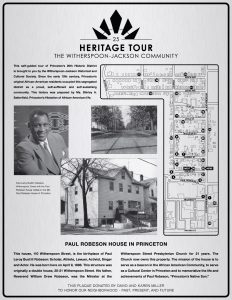 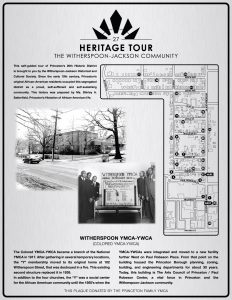 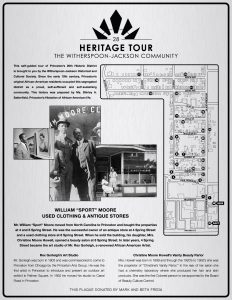 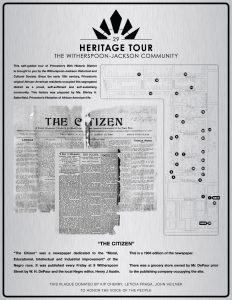 Click on the red pins to take the Virtual Heritage Tour of Princeton’s historic Witherspoon-Jackson neighborhood.

Four of these plaques, each representing one of the neighborhood’s four churches, have been installed since 2019; you may have noticed them on a walk around the neighborhood! However, the effort to design, manufacture, and install a series of historical metal plaques throughout the neighborhood began in spring of 2017 when Shirley approached J. Robert Hillier with an idea to mark historic sites with memorial plaques in the Witherspoon-Jackson neighborhood and surrounding area.

The plaque was then designed in-house by Studio Hillier. Its logo is based on an initial concept sketch by J. Robert Hillier. Each plaque is sponsored by an individual, family, or organization, and the sponsors’ names are printed at the bottom of each plaque. We are so excited that this vision shared by the WJHCS Board of Trustees is finally being realized.

These plaques will allow anyone living in or visiting Princeton to take a self-guided walking tour of the Witherspoon-Jackson neighborhood and learn the story of these places and the African American residents who populated them.

Another program that will be enabled by the installation of these plaques is a self-guided audio listening tour through this website, with Shirley Satterfield as your personal tour guide!

On November 13, 2021 from 12-3pm, each plaque will be unveiled during an outdoor walk along the Heritage Tour, accompanied by brief remarks and acknowledgements. Everyone is invited to join this special outdoor WJHCS event! 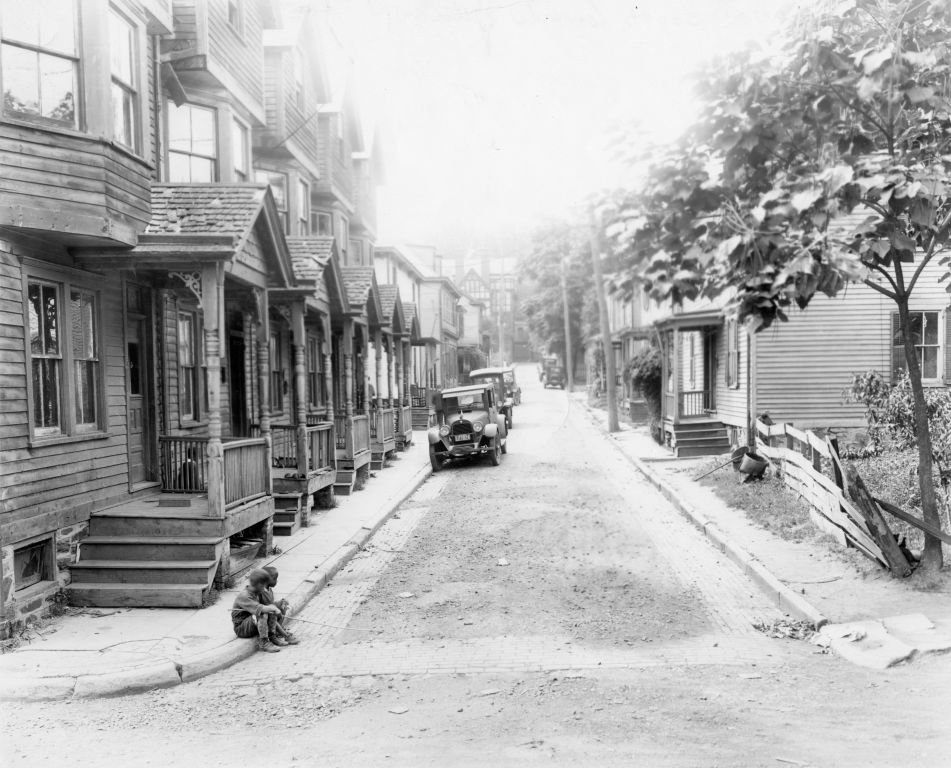 The African American community has been a vital presence in Princeton since the late Seventeenth Century. Many residents were slaves who worked on large farms and in homes as domestic and agricultural servants. Many were slaves to the early presidents and trustees of The College of New Jersey (Princeton University).

By the 1700s there were free colored residents who were descendants of slaves and, in later years, many had migrated to Princeton from the South to find employment.

The increasing wealth in the community together with the university’s growth created a high demand for labor and service positions that were generously offered to the colored residents. These families were relegated to the area of town that is now the Witherspoon-Jackson neighborhood. The neighborhood spans from Jackson Street to Birch Avenue with the perimeters being Witherspoon Street and John Street. 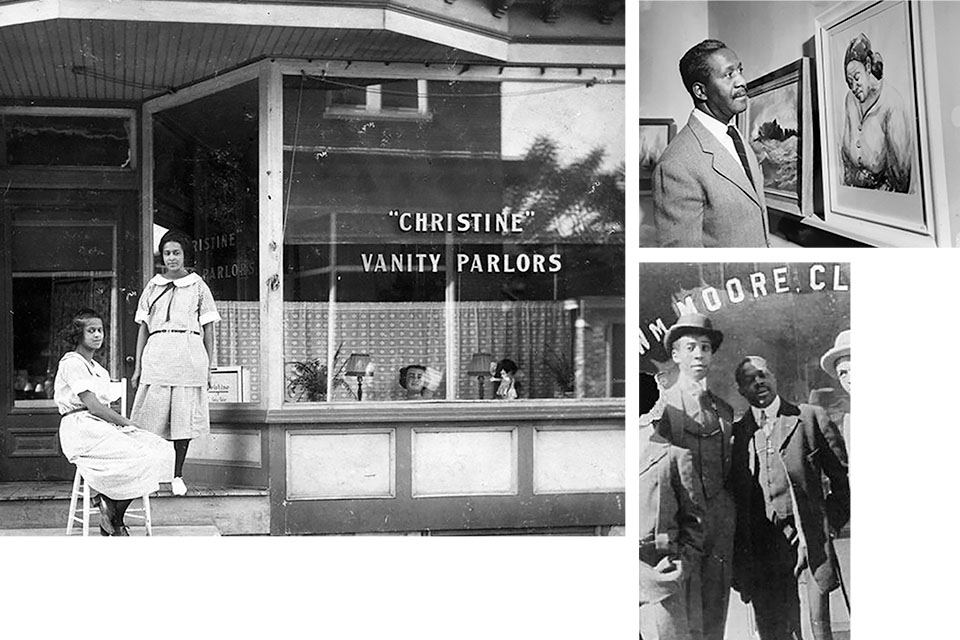 By the early 1900’s, there was an extremely active colored business community: florists, barber shops, beauty salons, candy stores, ice cream parlors, restaurants, clothing stores, and taxi service in addition to carpenters, teachers, lawyers, and physicians. This community was self-contained, and many homes were built by carpenters and laborers who lived in the area. Through the years of racial separation, red lining, urban renewal, gentrification, municipal neglect, and high taxes had a detrimental effect on many lives and businesses.

To commemorate the churches, schools, establishments, organizations, and the many businesses that supported the residents of the Witherspoon-Jackson neighborhood, and the rest of Princeton, we honor and respect all African American owned businesses that have existed in Princeton since the 1800s.

The 29 Heritage Plaques are merely representative of the many additional establishments that have existed, and the businesses included in the tour give recognition to individuals who, in addition to their economic and social contributions, were instrumental in addressing racial concerns in the community.