My family members have been faithful stewards of Witherspoon Street Presbyterian Church since the 1870’s! They were blessed with devoted ministers who not only delivered the Word, but guided their congregation through years of segregation, Jim Crowism, and separation in this town of Princeton.

In the early 1950’s, the church welcomed Reverend Benjamin J. Anderson, a minister who continued the struggle by leading his flock in a segregated town. He knew how important it was to bring Witherspoon and the First and Second Presbyterian Churches together for reconciliation, fair housing and equal treatment for Negro residents when they requested loans from the local banks.

David H. McAlpin, Jr. is a Princeton native, a 1950 Princeton University graduate and a student of Theology from Union Theological Seminary. While at the seminary, he became interested in human rights. He did field work in Harlem and assisted with integrating an all-white Presbyterian Church in Elizabeth, New Jersey.

In 1952, while still a student at Union Theological Seminary, McAlpin met Reverend Anderson, the minister at Witherspoon. Reverend Anderson asked if McAlpin might assist him with the ministry of migrant workers in Manalapan, New Jersey. The two developed a spiritual friendship and in 1955, after graduating from Union Theological Seminary, Reverend McAlpin was invited to preach his first sermon at Witherspoon Street Presbyterian Church.

Reverend McAlpin’s degree in Theology, his sincerity, and his dedicated work for human and social justice had all prepared him to answer the call as the associate pastor at Witherspoon Street Presbyterian Church. With the blessings of his wife, Mrs. Joan Rockefeller McAlpin and with his 20-month-old son, Reverend McAlpin was ready to share the pulpit with Reverend Anderson.

On Sunday, January 13, 1957, at 8:00 pm, the 28-year-old reverend David H. McAlpin, Jr. was installed as the first and only, white associate pastor in the 115-year-old Witherspoon Street Presbyterian Church. 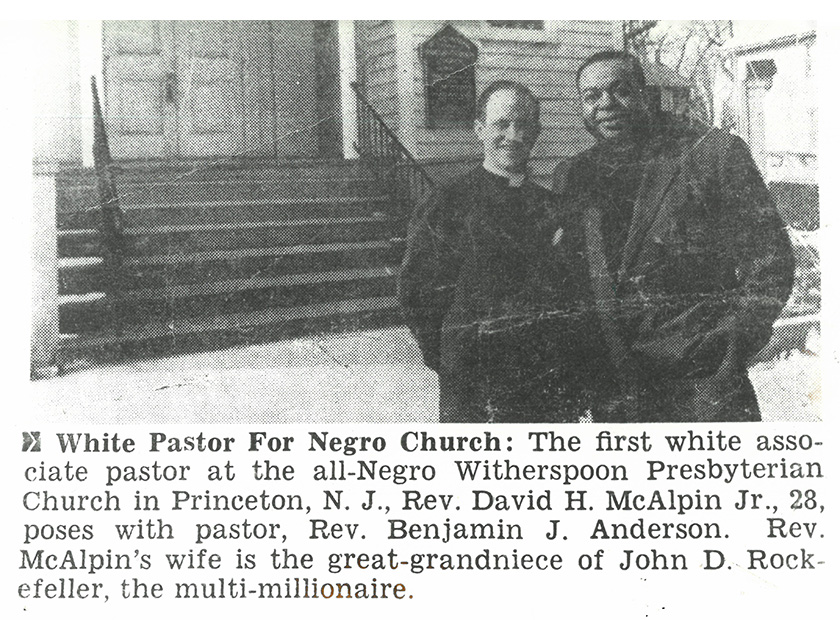 A noted newspaper’s front-page headlines read “WHITE PASTOR AT A NEGRO CHURCH!”  When news reporters asked him how he felt being a minister at a Negro church his response was consistent – “It is quite natural for me, natural for people at Witherspoon and quite natural for Christians.”

Along with being an associate pastor, he was also a Sunday school teacher and youth leader at Witherspoon. He was instrumental in discriminatory actions for Negroes who sought to buy homes.  He, along with Reverend Anderson and the Reverend Bodo at the First Presbyterian Church (now Nassau Presbyterian Church) established two integrated housing developments – Glen Acres in West Windsor (the residents have a Princeton address!) and Maplecrest located at Dempsey Avenue and Walnut Lane in Princeton.

After seven years serving as an associate pastor of a congregation of three hundred people at Witherspoon, Reverend McAlpin moved to East Detroit, Michigan where he served as pastor of the Covenant Presbyterian Church.  However, knowing that he wanted to return to his hometown, David McAlpin and his family travelled back to Princeton in 1971 and continued to serve this town as a foot soldier for justice.

The term “prison ministry” calls up the words of Jesus in the gospel of Matthew: “I was in prison, and you came to me.”  In 1980, before organizations were addressing injustices in the prison system, Reverend McAlpin was working in his Nassau Street office as the director of the Woodshead project.  The Woodshead project was a prison ministry that taught New Jersey inmates to make furniture, learn skills for possible future jobs, and learn other social and moral skills to solve problems in their personal and family lives.

In the 1980s, McAlpin supported the new movement among Presbyterian churches to support affordable housing in Trenton, New Jersey.  As he stated, “I had come to know about Habitat for Humanity and had taken work groups to Nicaragua. We decided to organize a Habitat chapter in Trenton.” In 1986, he became the founder of Habitat for Humanity of Trenton and served as its president until 2012.

He is a dedicated and contributing board member of the Paul Robeson House of Princeton and a Trustee Emeritus and past Secretary of the Witherspoon Jackson Historical and Cultural Society, an organization whose mission is to research, collect, preserve and share the rich history of African American life in Princeton.

I call Reverend McAlpin my teenage pastor and I treasure the yellow-covered book of religious stories that he signed and gave to me for my graduation from Princeton High School. I would see him practically every Sunday as I looked out at the congregation from the choir loft.

It took me all these years, with his permission, to call him David.  So now David (still my pastor, Reverend McAlpin), I am so proud and lucky to say that I respect you as my friend and colleague, and that I can say with pride that I have known you for 65 years and counting!