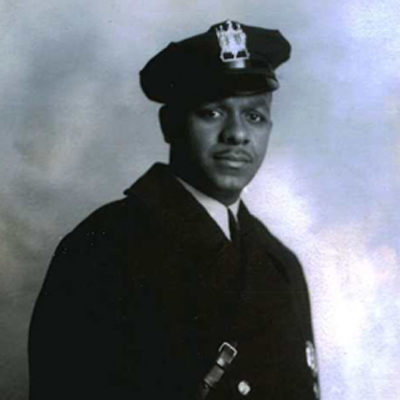 As we honor all men who nurture and care for children, we remember the men who have and continue to be our first responders. We remember and honor one of Princeton’s finest, Patrolman Walter B. Harris. Patrolman Harris was born and raised in Princeton, NJ, educated in the segregated Princeton Elementary School, and graduated from Princeton High School. He was a noted tennis and basketball player.

During his adult life he served with the Princeton Auxiliary Police before serving as the second African American policeman in the Borough of Princeton. Patrol Officer Harris was a proud public servant who honorably embraced love of family and loyalty to justice.

On February 2, 1946, Patrol Officer Harris responded to a disturbance at a men’s social club right across the street from his home. As a law-abiding citizen and policeman, he attempted to end the disturbance among three men. He was shot in this brave attempt. At the age of 31, after three years of dedicated service, Patrol Officer Harris was the first police officer in Princeton to give his life for the protection of the residents of Princeton.

Every year February 2nd is dedicated as “Patrol Officer Walter B. Harris Day” when Princeton flags are lowered to half-mast, bagpipes are played, and police officers, family and friends gather at 400 Witherspoon Street where a monument has been erected in his memory to honor his life and service.

Patrol Officer Harris’ older daughter, Ms. Monetta Harris, was not quite six years old when her father died. However, she does vividly remember the procedures that related to the acts of justice for her father. She states that her father was a loving and kind person who cared for and supported his family as well as all his sisters, sisters-in-law and their children.

Mrs. Florence Harris Broadway, his younger daughter, was three years old and was too young to comprehend what had happened to her father. She and her sister did not have the life experience of growing up with their father who cared so much for his family and the community. She does, however, remember being very proud of him.

Mrs. Broadway is thankful for her late cousin, Ms. Lucy Harris Hall, who shared many memories of her father and Ms. Hall’s uncle. She is grateful that Lucy was present to see her Uncle memorialized.

Both daughters are thankful that their mother, Mrs. Florence Harris Twyman, maintained an album of all the news clippings and various life pictures of their father—a lasting memory for Patrol Officer Harris’ children, grandchildren, and great-grandchildren. The album pictures and articles may be found on the Princeton Police website.

Patrol Officer Walter B. Harris was a man of valor who is worthy of a place of honor in Princeton, New Jersey.

Contributed by Shirley A. Satterfield