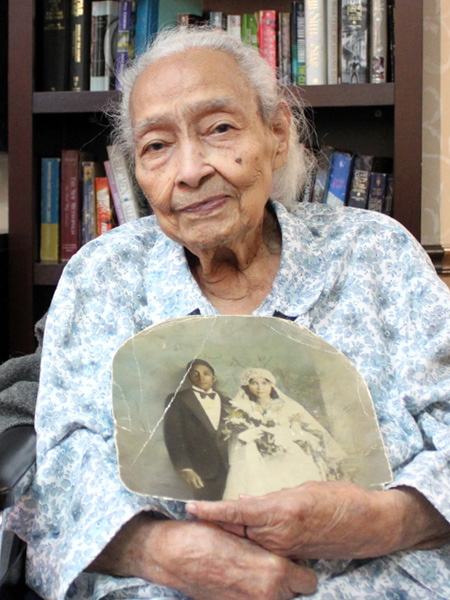 The Witherspoon-Jackson Historical and Cultural Society thought it would be most fitting to honor the life of Princeton’s Oldest Matriarch while she is still living!

106 year-old Maxie Fletcher is Princeton’s eldest resident and has lived a quietly profound life for the past 80 years in this community with great humility, dignity, and love. Mrs. Fletcher is special joy to me because I grew up on Maclean Street next door to the Fletchers. Like many of her grandchildren, my siblings and I benefited from the kind and nurturing spirit of this gentle giant.

Maxie, who was raised in the South, came to New Jersey as a young girl and was raised briefly in Trenton before meeting the love of her life, Lorenzo “Lefty” Fletcher, a lifelong Princeton resident. They married and raised five children. She is also the grandmother to over 20 and great grandmother to “many many more.” What we do know is that she clearly is a five generational matriarch, and she would probably know better than anyone each one of those children!

Due to the challenges of COVID-19 and Maxie’s challenges with hearing and memory, we spoke to her two surviving children, Deacon Lamont Fletcher and Mrs. Deborah Gibson, to help us shape Maxie’s story. I sat down over the phone with both of them to glean their insight into the incredible life and legacy of their beloved mother. Although Lamont and Deborah are ten years apart in age, their accounts of their mother in the context of their lives were almost identical.

Gregory: What do you think living in Princeton means to your mother?

Lamont: Mom was raised in the South. At around 11 years old, she came up north. She was the youngest of 9 children. Her eldest sister came up through the great migration to Detroit, then moved to Connecticut. She eventually came to Trenton. Aunt brought the girls up, including my mom. Later on, Mom’s life centered around her husband and children. Since our father was born and raised in Princeton, it seemed natural to continue their legacy here. I had several paternal great uncles who came from the farmlands of Virginia to find work in Princeton. Some were among the earliest founders of the First Baptist Church, and two served as deacons and trustees. One of my paternal uncles was the first black orderly at Princeton Hospital back when it was a house on Witherspoon Street. His father worked as a stable hand for the Stockton family until he was injured by a horse and ended up under the care of the family.

Deborah: Princeton was a very nice community for Mom to live in. She was able to do what she did best, caring for her family with love.

Gregory: What do you think were some of her greatest challenges in living in Princeton?

Lamont: Finding work- Being an uneducated woman made it difficult. There weren’t many black professionals in Princeton. She and many women of color at that time worked in the domestic sphere. Not only would they rise early and walk through all sorts of weather to fix breakfast, lunch, and dinner, but they often faced discrimination by the very families they worked so hard to serve. She has shared stories of how at the end of the day, the families would check her purse and packages for stolen items before they left. There wasn’t much free time. She often worked on Saturday’s and Sunday’s, but she never complained. She also made sure her children went to church. When she had a few minutes of spare time, she did volunteer work for the American Red Cross, soliciting resources for the American Heart Association. She worked hard and still managed to keep a home and raise her family. We never knew we were poor.

Deborah: I would agree with Lamont. By the time I was born, my parents had better jobs. Both my mom and dad worked at the university, and they always ensured that we would want for nothing.

Gregory: What attributes come to your mind when thinking of your mother?

Lamont: Mom was very loving. She was a “mother hen” and very protective. As a young child, I wasn’t allowed to go off the block of Maclean Street without her permission unless I was going to school. She always desired an education, but due to growing up on the farm, her access was limited. During the late 1950’s or early 1960’s, she worked for the University in the rare book section of the library which was perfect, because Mom was always a fierce and passionate reader.

Deborah: Yes, Mom was very protective, sometimes a bit too protective. (Deborah laughs) She didn’t mind voicing her thoughts and opinions either. You could always depend on her to be supportive. She helped me raise my children in their early years.

Lamont: Early on, my father worked for a black entrepreneur named Kid Green. He was an illiterate African American man but he owned several businesses including a stable and a bar out on Route 27 near Franklin Park. He was also one of the first black garbage pick-up company and grocery store owners. While Dad worked, Mom kept the home going.

Deborah: My Mom and Dad worked as a team. There would be times that I would go to work with my dad when he was driving trucks while my mom was working. He always made sure I had what I needed. They were excellent providers.

Gregory: What does having her still here mean for you, for us all?

Lamont: Having Mom still here gives me a chance to serve. Having her here helps me feel accountable as her son and also as a deacon. It helps me give back for all those days and times she was there for me. When I was a child with asthma, she rocked me, nursed me, and cared for me. Visiting her at lunch daily to make sure she’s eating and listening to her stories provides a unique opportunity for me to appreciate every given day we have. I’ve learned to appreciate not only her life but the life of the many other seniors in our ever-changing community. It helps me realize that the Lord has given me 24 hours each day. I think when my time is up the question will be: “What did you do with the time I gave you?”

Deborah: I feel so happy and blessed to have her, but it’s also sad because she really doesn’t want to be at the nursing home. We wish she could be home. It’s been hard, losing three adult children. It’s very interesting. Mom is still very comical. It’s funny watching her with one foot in this world and one in another (due to memory loss). She’s still so upbeat at times, still wanting to leave the nursing home and see her family and go shopping. At one point she seemed to understand about COVID-19, but now it seems as if she doesn’t completely understand why it’s lasting this long. She still talks about needing things from the store and going shopping. She misses seeing all her grandchildren.

Lamont: Keep your nose to the grind and go as far as you can. Keep on keepin’ on. Stay out of trouble. Keep relying on the Lord. Mom frequently reminded us that the Lord helped her raise her five kids. Family was everything to her.

Deborah: Mom has always believed in education. She always advised to get your education and live your life to the fullest.

We hope the memories of our community matriarch spark a lasting tribute for all our mothers. They work and sacrifice so much so that we might have the opportunity to live our best lives. May we learn from Maxie’s story and have the discipline to make the lives of those following behind us even better and brighter.