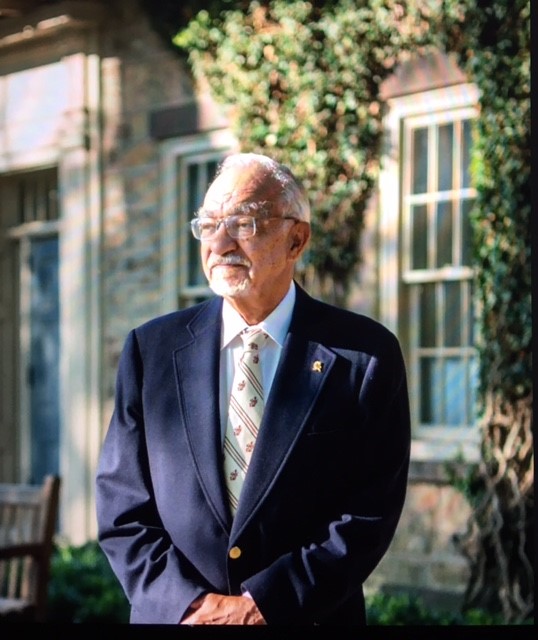 I knew before I began interviewing Dr. Rivers that he was a Living Legend, and a graduate of Princeton University class of 1953. I first met him a few years ago when we both began as original Trustees of the Witherspoon–Jackson Historical and Cultural Society. His younger sister, Evelyn, was a classmate of mine at Princeton High School. I knew Evelyn had an older sister but never realized that she had two older brothers, Dr. Rivers and Leonard, born years before both of us.

Shortly after we began our conversation Dr. Rivers spoke with pride about his childhood and upbringing. Born during the Great Depression on November 14, 1931, he started by saying, “Those were hard times.” In 1935 Dr. Rivers’ parents bought the home on 21 Green Street, where he and his wife Ruth, still live today. That same year Dr. Rivers’ mother began working as a live-in domestic at 146 Hodge Road for the family of Lewis F. Moody, a Princeton University Engineering Professor. When Dr. Rivers was four years old, he and his mother lived on Hodge Road for ten years. Some of his chores and responsibilities were dusting furniture, doing small chores in the kitchen, and cleaning windows in the pantry.  He recalled that from the living quarters, he would climb a staircase to an unused room in the tower that had a ping pong table.  He referred to the tower as, “My space and my playroom.”

During World War II he developed an interest in airplanes and would look out of the tower window when, “I became curious and wondered why and how airplanes flew.” He would exercise that curiosity by designing and building model airplanes.  Years later he studied and achieved his private pilot’s license. He talked about his elementary school years and being transported from Hodge Road to the Witherspoon School for Colored Children in a taxi owned by Thomas Moore, grandfather of Yina Moore, former Mayor of Princeton Borough.

Many of Dr. Rivers’ relatives worked for Princeton University. In 1920 his father, Robert J. Rivers Sr., left Chesterfield County, South Carolina during the Great Migration to find a better life in northern states. When he arrived in Princeton, he began working at Tiger Inn, a Princeton University eating club on Prospect Avenue. He remained there as a waiter and housekeeper for 35 years. Former students shared warm memories with him, and he enjoyed a testimonial prepared by some of them many years after he retired. When he left Tiger Inn, he still connected with university students as a dormitory janitor. Dr. Rivers and his brother, Leonard, also worked with their father at Tiger Inn on many football weekends and Dr. Rivers spoke proudly about his brother Len who continued to serve Princeton University as a varsity football coach and head varsity baseball coach.

Members of the Hillian Family also migrated from South Carolina, Mabel, Bessie and Tom were Robert J. Rivers Sr.’s brother and sisters. They worked as cooks and domestic servants at the University’s McCosh Infirmary. They worked at the Infirmary for a combined total of more than 100 years and their story is about doing good things for many people. Dr. Rivers is very grateful for their love and support.

In communicating the importance of his early education, Dr. Rivers mentioned noted African American educators, Mrs. Potter, Mrs. Griggs, Mrs. Follins, and others who lived here in the W-J Neighborhood. His favorites were his 6th and 8th grade teachers, Mrs. Harris and Mrs. Gates. His favorite subjects were math, science, and reading.  He was also careful to point out that his education started long before he attended The Witherspoon Street School for Colored Children. During the summers, Dr. Rivers‘ mother challenged him with arithmetic problems on the back stairs outside of the kitchen and sent him to the Bainbridge House (then the Princeton Public Library), to read many books.

In finalizing his thoughts on the Witherspoon School for Colored Children, Dr. Rivers said, “The teachers at Witherspoon taught us a lot more than reading, writing, and arithmetic. History was expanded to our Black history; we had a chance to enjoy Langston Hughes and they strengthened the good feelings we had about ourselves and what we could do”.  He followed up with, “There were major differences in this regard when I went to Princeton High School (PHS).”

When asked to expand on those differences, Dr. Rivers shrugged, and shook his head slightly before telling me “In my first class, I listened to a nigger joke.” When asked if the joke was told by a student or teacher, he responded, “A teacher, and during my high school experience there were at various times unpleasant encounters with racism.” Dr. Rivers continued to recount that one of the most interesting aspects of his high school experience happened during his senior year regarding the class trip to Washington, D.C.  “A debate grew in the Black community. There were about a dozen of us who wanted to go with the class. The problem was we knew that there was going to be segregation when we got to Washington, and that we would have to lodge in another place, not with the white students, and we wouldn’t go to dinner with them.” Dr. Rivers explained that many parents felt that the children should go and that the Jim Crow aspects of the trip to Washington was just another experience of life that they had to deal with. He said there were also strong feelings of many others in the Black community that they should just say, “No”, and not go. Dr. Rivers remembered his mother who was in favor of him going on the trip, arguing across the backyard fence with one of his teachers, who was opposed to the Black students’ sojourn to Washington.

He spoke of a big gathering, and a community discussion on the issue at the Witherspoon Street Presbyterian Church, that was moderated by Reverend Milton Galamison, who would become an outspoken Civil Rights leader in New York after he left Princeton. At the conclusion of the meeting, the parents decided that the Black students would participate in the senior class trip. Dr. Rivers emphasized that he personally had an excellent learning experience during his time at Princeton High, “We survived, and did all right. I don’t think I could’ve had a better education before setting out on my journey.”

When asked to expand about teenage years and high school influencers, Dr. Rivers spoke about a New Jersey Boys State Program sponsored by the American Legion and held at Rutgers University. As a PHS student he represented Charles Robinson Post 218 American Legion, still located on Lytle Street in the W-J Neighborhood. Dr. Rivers spoke of the “Separate but Equal” atmosphere, but also talked about the significance of meeting another Black student that would later become his classmate on the Princeton University campus.

For Dr. Rivers, a strong and nurturing childhood was shaped by the women on Green Street who all acted as mothers and village caretakers, to the children. “I was a latch key kid” he said “they kept an eye on me” as did Reverend Parker, a main influencer, and the members of First Baptist.

There was also Dr. Rivers’ relationship with Reverend Parker, the minister of the First Baptist Church, located across the street from his home. Reverend Parker sent Dr. Rivers on a nine-hour train trip to Youth Divinity School in Rochester, NY.  Ultimately Dr. Rivers did not become a minister, however this and other experiences, propelled him to give thought to a life of service, and, to this day, he credits Reverend Parker for the strong influence he had on his spirituality.

From my perspective, one of the most important facets of his life that Dr. Rivers shared with me happened in 1948 when he read the New Jersey Afro American Newspaper. The publication contained a very comprehensive review about the health of African Americans regarding inadequacies of services, levels of education, and the lack of Black doctors in the medical profession. He also credits Dr. Charles Drew, “My hero”, and major influencer in his life for the reason why he chose the medical profession as his career goal.  Dr. Drew was a graduate of Dunbar High School, and Howard University located in Washington, D.C and attended McGill University Medical School in Montreal, Canada. He was an American surgeon and medical researcher. Dr. Drew “Researched in the field of blood transfusions, developing improved techniques for blood storage, and applied his expert knowledge to developing large-scale blood banks early in World War II. This allowed medics to save thousands of Allied Forces’ lives during the war.  As the most prominent African American in the field, Drew protested against the practice of racial segregation in the donation of blood, as it lacked scientific foundation, and resigned his position with the American Red Cross, which maintained the policy until 1950.”

Dr. Rivers also talked about his decision to take Latin during his four years in high school initially believing that it was required, when in fact it was not. Latin was needed to write prescriptions, and according to Dr. Rivers it turned out to be his most enjoyable course.  It was an intellectual challenge with other students who wanted to go to college. It was also his first real experience in public school and an integrated setting. He continued to say, “There was a shared humanity in the course, the students got along great, we learned a lot from each other, it was an excellent course, and the teacher made it a lot of fun!” What I found very interesting was that Dr. Rivers then reflected on how well the teachers at the Witherspoon School for Colored Children had prepared their students for the challenges they would encounter in a separate but equal Jim Crow world. He then noted that Princeton was a southern town in the north.

Dr. Rivers also referred to his childhood vision of becoming a dreamer. He credits not only the exploits of Dr. Charles Drew but also the end of World War II in 1945 when he stopped living on Hodge Road and came back to Green Street full time.  He remembers there being a very optimistic feeling in the W-J Neighborhood and a changed atmosphere on the Princeton University campus. For the first time in its history there were four Black students at the University due to the addition of a Naval Officers Training Program. Also, better days were ahead because a relative attended college with the aid of the GI Bill.  Through their success in college, they acquired better jobs. Categorizing the feeling at that time Dr. Rivers stated, “We were shooting for the moon!”

Thank you, Dr. Rivers, for sharing with us your voice, your experience, your wisdom, your memories, and your relentless hope for a better future. Even though you faced racism and segregation while growing up in Princeton, you rose above it and blazed a path for countless others, from being one of the first black students admitted to Princeton University to your outstanding career as a cardiologist and vascular surgeon. We are so fortunate to have you in our midst, a proud and accomplished Living Legend of the Witherspoon-Jackson Neighborhood, and the town of Princeton.